Journey to the West Library
(www.journeytothewestlibrary.weebly.com)

The story of Journey to the West became popular to all, even in the Western world, with many English translations throughout the past few centuries. Many novel, television, movie, comic and game adaptations, too, use this story, or even at least the iconic Monkey King, as a basis. ​Journey to the West is no doubt one of the greatest, if not the greatest, novels of all time. 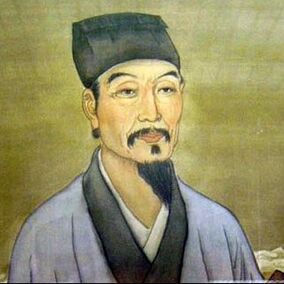 [Src. 7] A painted portrait of Wu Cheng'en [artist & date unknown]
Since fiction was not a prestigious genre in classic Chinese literature, the authorship of fiction novels were not carefully attributed and soon became unknowable. The author of Journey to the West is still in some sense, uncertain, especially with the fact that the novel was first published anonymously. The novel has been popularly attributed to Wu Cheng'en (c. 1500-1582, 吴承恩), ever since a local newsletter article in 1625 from Wu's hometown claims so.

It's highly interesting to note that the novel was published in 1592, and Wu Cheng'en's death date is marked in 1582. That's 10 whole years before the novel was published by the Shidetang (世德堂) publishing house. ​The novel was indeed published anonymously at first, most likely due to the fact that there were set rules during that time, regarding what could or could not be written as literature. During Wu's time, in the Ming Dynasty, there was a trend in literary writing. Literature was supposed to written in "classical Chinese (guwen, 古文)", a form of old Chinese popularised during the Spring and Autumn period (771-476 BC, chunqiu, 春秋). Classical Chinese has also become to be known as "literary Chinese", and is traditionally used in pieces of formal literature. The opposite of literary Chinese is "vernacular Chinese (baihua wen, 白话文)", which is just the written form of informal spoken Mandarin Chinese. Wu Cheng'en allegedly went against the classical Chinese trend of the time, by writing his Journey to the West in vernacular Chinese, and because this was against the cultural rules of literature, the novel was published anonymously. For nearly 300 years, Journey to the West had no credited author.

Below is a short list of the major characters that appear in Journey to the West. Since they are listed on the Home page as main characters, they would not require an introduction when being mentioned in articles.

When talking about Journey to the West, the 100-chapter novel can be divided into 4 major parts, each telling a different section of the novel. Note that these 4 parts do not refer to the four volumes that Anthony C. Yu or W.J.F. Jenner have published their translations of Journey to the West in, nor do they refer to each set of 25 chapters of the novel's 100.
A simple full summary of the whole novel can be found on this blog here:
Novel Summary

[2] ​Four Great Classic Novels (四大名著)
These are the four masterpieces of Chinese literature, which are still popular with readers ever since their publications 500 years ago.
In order of release date, these four novels are: Water Margin (shuihu zhuan, 水浒传), Romance of the Three Kingdoms (sanguo yanyi. 三国演义), Journey to the West and Dream of the Red Chamber (honglou meng, 红楼梦).

[6] Tripitaka [...] Monkey [...] Pigsy [...] Sandy
These English names were originally created by Arthur Waley. Since they are so well known to English readers, I have chosen to adopt them here, throughout this website.

[7] Bodhisattva (बोधिसत्त्व, 菩萨)
​Literal meaning (Sanskrit): one whose goal is awakening.
A Bodhisattva is a status in the Buddhist pantheon. These deities are those who have successfully reached enlightenment, but does not attain full Buddhahood due to the delay of them remaining in compassion for the sufferings in the world.

[8] Guanyin​ (观音)
​Literal meaning (Chinese): one who observes the voices (of the suffering).
Also known as: Goddess of Mercy.
Bodhisattva Guanyin is the Chinese counterpart of the Sanskrit deity Avalokiteshvara. She is usually depicted as a female in Chinese culture.

[10] Buddha (बुद्ध, 佛)
​Literal meaning (Sanskrit): one who has awakened.
A Buddha is the highest rank for an individual of the Buddhist pantheon. It is a title given to those who have found enlightenment and reached nirvana.

[13] Metal Star (金星)
Also translated as: Gold Star.
I have chosen to use this translation (my own) rather than the more popularly known "Gold Star" because the name Jinxing 金星 here is the common Chinese name referring to the planet Venus. In Chinese, the five planets closest in orbit to the Sun (excluding Earth) are named after the five elements (wuxing, 五行) of water, metal, fire, wood and earth respectively for the planets Mercury, Venus, Mars, Jupiter and Saturn. Gold is not a recognised element in traditional Daoism and therefore is not appropriate for Venus's name.